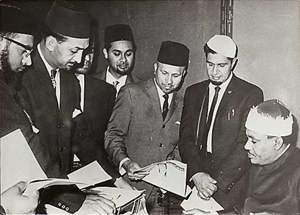 Imam Harun is not as well-known as he was in the eighty generation. Of course, the valuable work of Barney Desai and Cardiff Marney which name is The Killing of The Imam is one of the reasons behind that Imam Harun had a broad repercussion among the eighty generation in Turkey and in many Muslim countries. This book which focuses on the faithful and rightful struggle of South African Imam Abdullah Harun, continues to help us in understanding the Imam’s moral heritage. 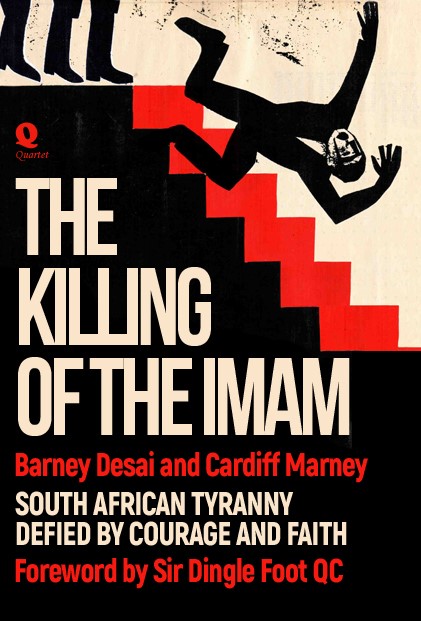 The slave trade, which had grown tremendously in the 1800s and the policies of racial separation brought the Apartheid regime to South Africa after the National Party came to the power in 1948. Apartheid regime was based on the superiority of the white race that came to South Africa with colonial activities over blacks and other races. This regime exposed racist and discriminatory policies to South Africa which is the pearl of the continent. The people who are isolated from political and social life and separated as black African, colorful and Asian struggled with the racist system by some organizations such as PAC (Pan African Congress). One of the voices against colonialism and racism was the voice of Imam Harun.

On the holy day that people of Cape celebrated the birth of Muhammad(1956), Al-Camia Mosque, selected Abdullah Harun who comes from a Malay family, and had studied Arabic and the Holy Quran at an early age as the Imam of the community.  The appointment of young Abdullah as an Imam created a tention among the Muslims of Cape. Because, Abdullah Harun was very young. And, the appointment of the Imam, was not only the representation of the sensitivity of religious duties, but also it was the representation of maintaining Islamic tradition. However, soon after, Abdullah Harun became very well-known person for his humility and piety and Imam was loved as the man of the people. The Imam formed an active community that includes especially young people in the first years of his imamate. He was organizing festivals and was forming relief agencies for the poor. He wanted to continue the education of young people by forming research groups. After a while, he received an honorary editorial offer from Muslim News which is the only Muslim newspaper in the country. This development in his editorial life, gave him a superior political perspective that enabled him to differentiate from other Imams. 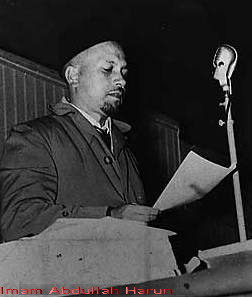 Imam Harun, who was continuing his aid and educational activities, could not remain silent to racist practices in his country. Because according to Islam which he believes, man should deal with his life of Hereafter and his life in this world simultaneously. The life of the Prophet (saw) was the most important example of this issue. The Apartheid regime was making regulations that would put the poor in a more difficult situation and reinforce the racist regime with the 31 May 1961 Constitution which the African people’s opinions about it were not asked.  Strikes and protests started in the country. Imam Harun personally supported this strike and resistance from the minbar of the mosque and invited the people of Cape to fast during the strike. Because, according to him, “The color of a man’s skin was not the measure of his humanity in no sence.” Therefore, he participated in the conferences of SACPO (South African Coloured Peoples Organization) that was organizing the strike. With the retrogression of political situations, some friends of The Imam in SACPO were forced to leave the country, while others were commited to prison. 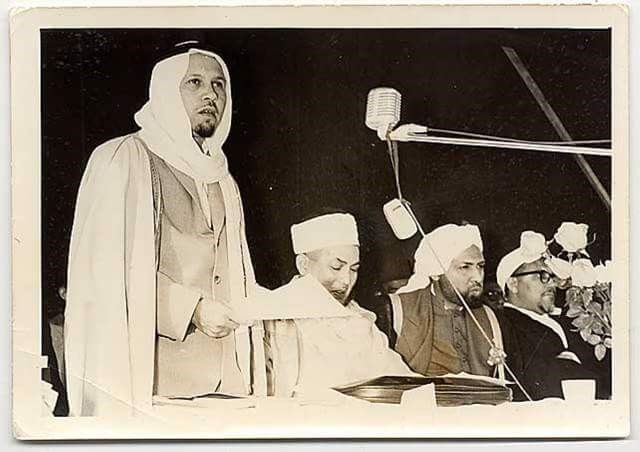 Imam Abdullah Harun was separated from his familiars. He wanted to be away from the political atmosphere of South Africa and decided to go to Mecca with his wife Galiema for their duty of pilgrimage. The Imam’s travel was heard by his friend Abraham who banished from Cape to Mecca, and by Mujahid who was working for PAC in London. On a hot morning of Mecca, Imam Harun met his beloved friend Abraham. Imam Harun was invited to Cairo and then to London by the representatives of PAC to consult the situation in South Africa. Imam Harun found funding for African students to study in Egypt and made talks for the poor relief in Cairo and London.

Imam Harun who began to do his parts with a new excitement after his return, continued his political correspondence and the educational activities and took care of the families of political prisoners. The activities of Imam Harun were noticed by the officials of the Apartheid regime. The imam was constantly monitored by the police. Not long after, on the morning of May 28 1969, Imam Harun was taken from his home and arrested. Although he tried to calm his wife Galiema who was worried for her husband by saying that the police will just ask some questions, this was his last exit from his home.

Imam Harun was subjected to unfair police questioning for days. It was known that he was eating only the halal food, that’s why the food that his family brought for him instead of the food at the police station was not given to him. He was questioned about the people he was in contact with politically and his correspondences and visits.  After a while, Imam Harun who did not give the answers of these questions began to exposed to torture physically. During the torture, probably, he remembered Bilal (ra) who was subjected to racism and said, “Ahad! Ahad! ”. Imam Harun could not endure his rib fractures, wounds and his hunger for days wanted to see a doctor. But, his demand was not fulfilled by the police. Imam Abdullah Harun could not tolerate the physical and psychological torture and he passed away on September 27, 1969 after 138 days of solitary confinement. Heart failure was recorded as the cause of his death in the autopsy and it was confirmed by the judges of the Apartheid regime that a second person had no effect on his death. 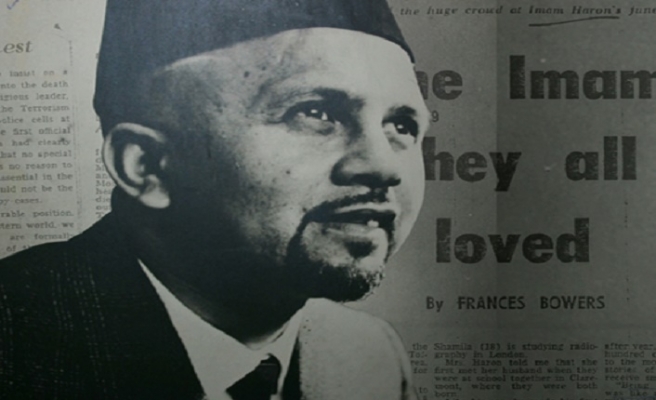 Last words of Imam Harun who sacrificed his life to bring peace to South Africa were:

“In the name of Allah, the Most Gracious and Most Merciful. Forgive my sins. Protect my wife and children. Now, they need you more than ever. Oh, The Most Merciful! You’re one, I believed it. And the Prophet Muhammad is your Messenger (saw). I feel the pain, I can no longer withstand this suffering. Oh Merciful! Forgive my weakness. Oh Merciful! Take my soul, free my body, free my country! ”

Cartoonist Hasan Aycın, in order to express the moral heritage of Imam Harun, draws a cartoon in his book “Bocurgat” and states these following words:

“I read the biography of Abdullah Harun when it was first published in Turkish. It influenced me very much. So, I named my first son Harun. One day we were talking with an African. I asked about Abdullah Harun and he said that he did not know. When I tried to explain his biography, he hugged my neck and:  “You are talking about Imam Harun. How do you know him? He’s a legend. African mothers are raising their children by telling his heroical life … ” said and cried for a while. I still remember that moment.  I wanted to mention Imam Harun with a line. But there was something missing. Years later, one night, when I pushed the TV button, the screen was full of South African people. It was reported that Mandela was liberated.  Mandela was raising his hands and was smiling. Mandela was getting out of the prisons of South Africa where once the young body of Abdullah Harun got out. Now he can smile and can wave his hand to the crowds … I felt the deficiency was complete. And I drew my line, for South Africa in the memory of Imam Harun at that night. ” 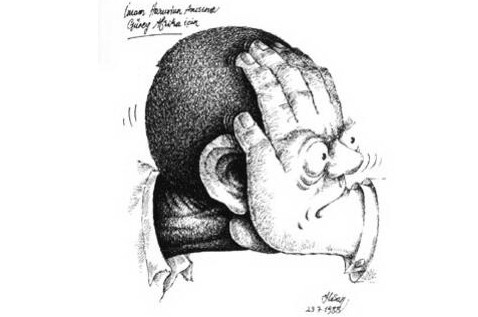 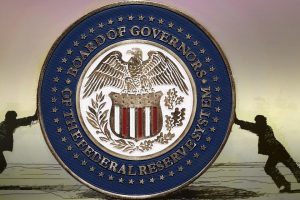 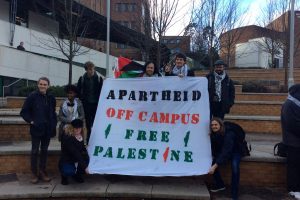 Protest in Exeter: Apartheid Off Campus and Free Palestine